A Slice of Love and Loss…

Home > Uncategorized  > A Slice of Love and Loss… 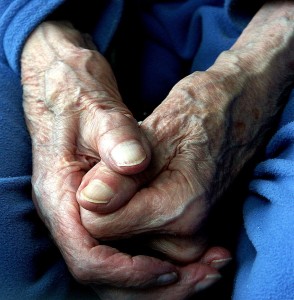 Posted at 18:35h in Uncategorized by Lauren Poussard
0 Likes
Share

It has been almost 20 years, and I still think of him.

Many times over the years I’ve wished I could find his family to tell them how much he helped me understand about what really matters in life, and what a powerful message he unintentionally delivered to those lucky enough to be paying attention. But, I could never find his family because I don’t even know anything about him, not even his name.

Many years ago, sitting at a restaurant waiting for a friend, I became aware of an elderly man entering the restaurant because excited greetings suddenly started coming from everywhere- the hostess, the wait staff, the bus boys, the manager. It was clear someone important had entered this unremarkable chain.

I don’t have the best memory, but I still see his ensemble; khaki corduroys, pale blue oxford, olive vest with large wooden buttons, tweed blazer, worn burgundy plaid tie. He moved slowly, carried his cane more than used it, and was smiling and waving as he traveled along the stained “maroon carpet” of the entryway.

My friend was late, and while waiting I kept watching him. He opened the menu, looked at it briefly, but folded it up as if just going through the motions. Putting his head on his hands, he sighed, and from across the aisle I could feel his sadness. Some people say society fails to see the aging members who move amongst us, but I don’t know how anyone could be so oblivious as to miss him. This quiet, unassuming, old man had a presence which commanded you notice him.

I finally asked the waitress, “What’s the deal with that man? It’s like he’s famous here.”

She shook her head and said, “It’s so sad. His wife died last year. They were married 65 years and he’s lost without her. Once a week he gets dressed and comes here to get out of the house. He orders a small pizza, eats one piece here, then eats the rest every day for lunch, piece by piece, until he comes back again.”

I typically try not to cry with wait staff at restaurants because it’s not socially appropriate, and tends to cause justifiable alarm, but that day I did. Tears running down my face I looked at him again, his head down, absentmindedly rubbing the side of his water glass.

I wanted to run over and hug him. I wanted her to come back to life and sit across from him again. I wanted to make it stop hurting for him. I wanted all these things which are illogical, irrational, and against the grain of the natural cycle of life. Life is about love, and loving deeply. It’s about finding your person to go on this journey with, and showing up for wherever the journey may lead. But, life is also about saying goodbye and living through loss, even when that loss is so great you are certain you’ve lost yourself.

The waitress came back over and when she noticed my tears she leaned down and softly said, “Every week when he leaves, we say, ‘See you next week!’ And every week he smiles and says, ‘You sure will- unless i’ve gone home to her!’”

I think she was trying to preempt the wailing she could see coming on the horizon and avert a traumatic scene for the other innocent diners.

I can’t say her efforts helped.

When he left, and I heard his goodbye, I’m confident my sobs were audible to several other tables.

My reaction may have been a little over the top, but in my defense, it’
s now been twenty years and he continues to be one of the greatest teachers I have ever had the privilege to meet.

The whole point, and purpose, of life?